We perform regularly with improvisation and choreographies which consist of a wide repertoire of dance styles from old to modern, with a choice of music and image of a particular era which matches the music. Elegance and humor are important, but the main thing is the typical characteristic of the tango: modesty.

Various venues and a range of events and occasions offer a platform to show our dance, for example:

We also perform in tango salons in The Netherlands and several European countries. 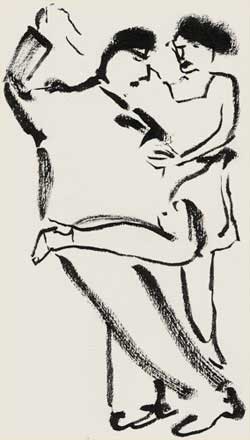 The reaction of a Russian visitor, Ina Faber, Lagovskaia to Olga (who gave her a free ticket) on the show Tango Heroes in “The Modern House of Music in Moscow.December 1, 2007Olitska, my best friend, thanks, thanks, GIGANTIC MANY THANKS!!!

What was this an incredibly joy! I love Tango. The dancing sea of emotion, intense passion, delight, super temperament, life itself. The gig was a resounding success. The audience lived really well during the show, could not stop, and then responded with applause. At the end there was chanted and people seemed to be ready to go on stage.

I felt that I was in a simple café in a small town in Argentina. In the street it is hot under a merciless sun. But here’s the cool and cozy, while the music plays. Men and women drink good wine. A couple dances. And so you would want to participate.

Definitely very special was the play of the musicians: Two bandolionen (a delight), Carel Kraayenhof -incredibly well, two violins (with an excelling violinist showing such passion that the hairs of her bow broke; she danced also very deserving the Tango), a piano and contrabass.

I haven’t seen in times dancers performing the tango in such an amazing way. The bodies of the couple flowed together as two winding rivers to one current, incredibly graceful – professionalism of the highest kind, light footed, almost weightless, touching the floor like a painter with the tip of his brush, very precise and clear patterns.